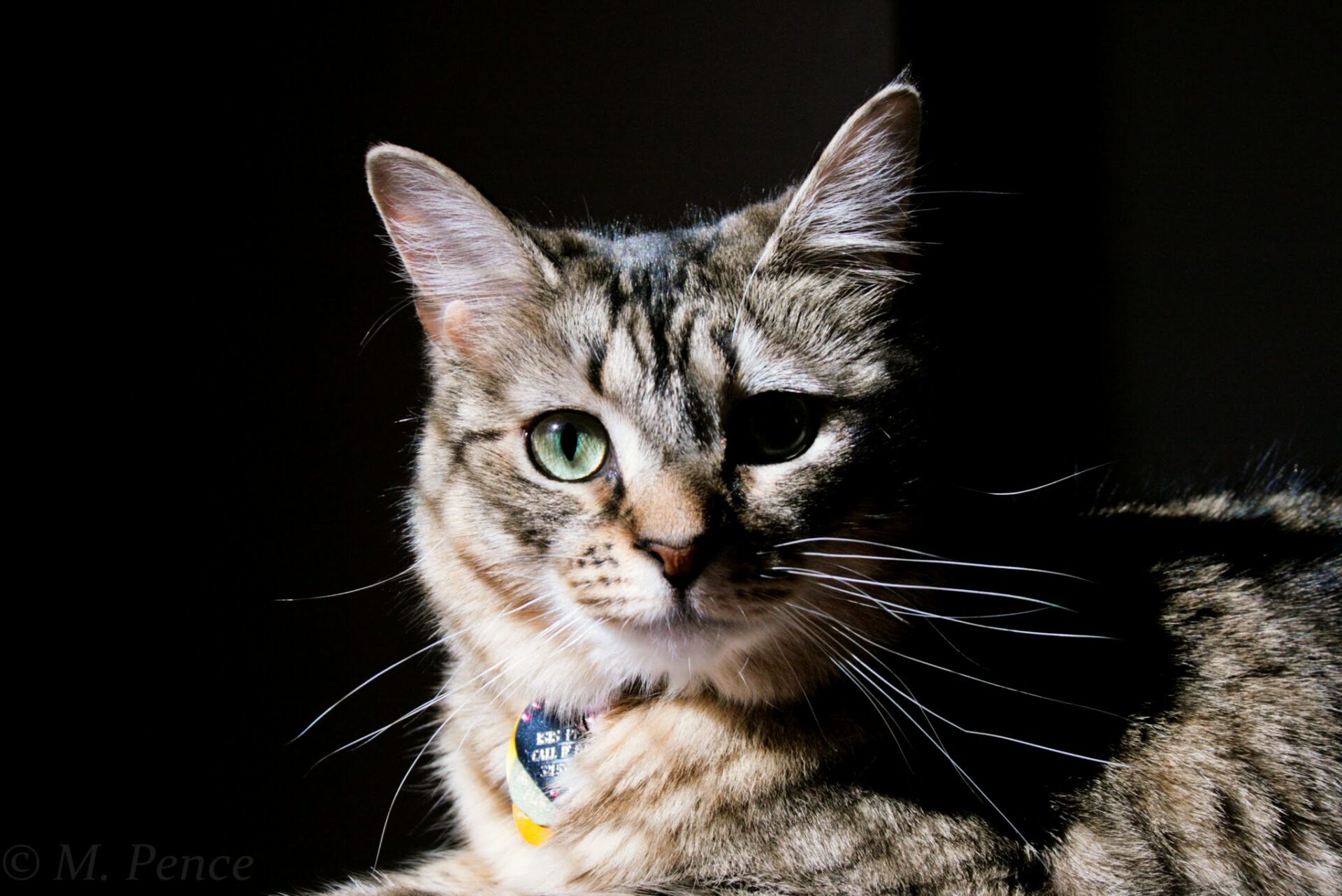 I Carry your Heart With Me

9 and 1/2 years ago we lost an almost 20lb meatball of claws and purrs named Raven. She came to Shawn well before he ever met me, via a lady who I believe asked him, “Hey, want a cat? We don’t want it anymore,” and became the illusive meatball ninja of almost-feral timidness that also demanded pets and scratching but only on her terms.

When Raven passed, we were finally living on our own in a one bed room apartment instead of with my husband’s parents which, at our ripe old age of mid 30’s was a fuckin’ step up despite the popcorn ceilings and water damaged, warped counters. So since we were allowed 2 animals, we did what any cat-crazy couple did and went immediately to adopt.

It was at a PetCo adoption event in the middle of the store. I remember the color of the bars of the cage she was in. They were black coated and she was in a cage with a beautiful short-haired orange kitty that straight up had a worm wiggling out of his butt. She was sitting, gorgeous, and looked utterly terrified and I don’t remember if she meowed at me or what but it was love at first sight.

Shawn was signing the papers probably at the same time I was holding her in my arms and her thousand-yard clueless stare was so adorably funny she owned my soul forever after.

The vet-tech whom fostered her told her that she was a very shy girl, and it may take days for her to come out of hiding. True to her warning, which we assured her didn’t matter to us–she hid behind our bed within seconds of coming home.

And I sat down on the floor near the bed and made a discovery that she really liked the song, Sleigh Ride which is a Christmas carol–but sung all jacked up and squeaky high voiced. She came out, ate a whole can of food and then …never really went and hid behind the bed again.

We shared photos of Isis out and about the day after to the woman who fostered her in an email, who exclaimed she was impressed she wasn’t hiding.

She had a cold and she had worms. We treated them immediately. She had a purr you could hear from six feet away when you pet her and her favorite thing to do was to sleep. Sleep on me. Sleep under the blankets near my stomach and give me razor sharp biscuits on my stomach that pierced through whatever I wore and would go on for hours. Sleep on my side draped like a living cat-boa from my neck to my thighs once she was full grown, and, sleep on my hands, arms, or right by my face licking me for hours.

I remember her first reaction to moving out of the one bedroom apartment. The apartment’s ceilings were extremely low, low enough that my husband who is six foot tall and some change could simply lift an arm and touch easily. When we purchased this house we live in now, in the living room there’s an extremely high arch. Probably about a 12 foot high ceiling in which Isis was immediately terrified of.

It was a new place with new smells. She was terrified of that. Then, it had these HUGE MCLARGE big wide open ceilings!

The first 24 hours of living in there she crawled into a fabric cat-cube and refused to come out. She stayed in it, terrified, for so long she actually peed on herself and we had to clean her up.

Then, it took her an entire month to adjust to the ceiling. When she did come out of her fabric cube to eat or use the litter box, she would stop dead-ass in the middle of the living room, hunkered down as close to the ground as possible–tail down and straight out behind her. She’d roll her eyes upward as her pupils dailated so wide as to eat up the gold of her irises and shiver. She would then–and there’s no better way for me to explain this–attempt to sneak through the open space as if, somehow, the ceiling was watching.

She eventually adjusted. But I will always, always remember that month watching her be absolutely scared nearly shitless and yet, still doing what she needed to do anyway.

When anyone came to visit, she would hide under our blankets until they left. Otherwise, she grew out of being terrified of everything mostly familiar in the house and went back to being the ultimate sleeping buddy.

The only other person that ever earned her trust was my sister-in-law, Kim, but since she’s a registered dog trainer who only uses positive reinforcement training…That kinda really makes a lot of sense.

She was always on the bed with me. If I felt good. If I felt bad. She would be on the bed and her raspy tongue would lick my arm or fingers or entire hand for half an hour, purr-cleaning the entire time. My pillow would rattle like loose glass in a windowpane during a thunderstorm with the purr that came from her chest.

And she was gone.

No more will I be yelled at for 30 minutes until I pet a magnificently furred beast with a purr that could be heard from feet away.

No more will I place my hand deep into a sheep-curled round, fat belly and soft pink skin and then be bit gently followed by a head bonk.

I won’t wake up tomorrow and see her bean-curled in the middle of our pillows.

Tonight, I washed her pink bowl. The very same pink bowl we purchased for her in 2010, where the little black cats all washed off–but the same–washed it and dried it and set it aside on the counter.

I will not be able to fill it with cat food and watch her just lick the gravy and leave the food behind. There’s an empty collar and an empty hole in my home, in my heart, and in my life.

i carry your heart with me(i carry it in
my heart) i am never without it(anywhere
i go you go,my dear;and whatever is done
by me is your doing,my darling)


[i carry your heart with me(i carry it in]
BY E.E. CUMMINGS