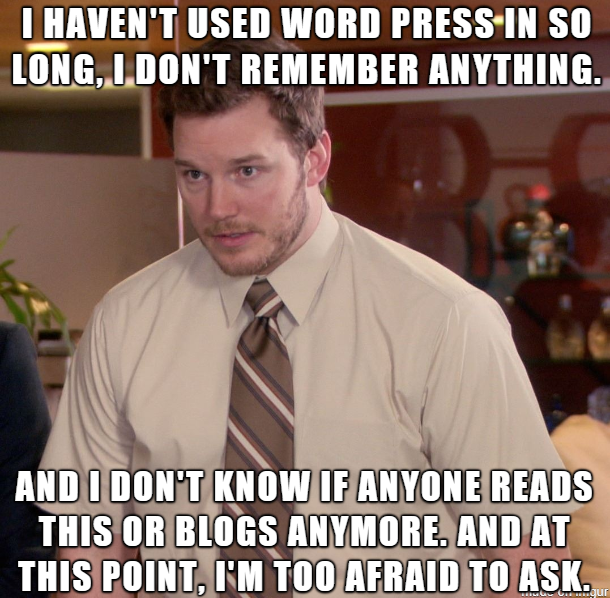 Published by Pinkatron2000 on December 27, 2018
[pullquote]Protip kid: nobody fucking knows what they’re doing either so they either wing it or hire someone to wing it for them[/pullquote]

It is almost a new year and as tradition in this household dictates, it is a time of trying to pick up shit you haven’t done in seventy five thousand years in an attempt to better yourself. Maybe. A little better. Pick up some things. I guess? Anyway, what I mean is, Hello WordPress.

As you may have guessed, there was a hiccup a few months ago. We installed a new theme (that wasn’t Divi) and that theme pretty much turned all of our posts over the entirety of this blog’s internet life as unpublished/drafts….as well as posting 292931232 garbage? sample? posts of Lor Ipsapoop and pictures of women flashing butts in bathing suits.

I have nothing against women or men or gender fluid people in bathing suits, nor their butts. But that isn’t exactly what 2phatgeeks is all about. It’s not always about butts. Sometimes.

So after spending months trying to figure out WTF to do to fix it, given the super internet genius I am very much not, coupled with the announcement late 2018 that Google has decided to shove the middle finger at G+ users right in their eyes, I said fuck it. I’ll use a new theme. And I remembered my first theme love, Elegant Themes and how much I loved them .I thought I’d go by to see how they were doing. Too long; didn’t read: they were doing just fine and I love them and so I got Divi theme plus Divi builder, made this hot mess that is the new 2phatgeeks site and…

Promptly forgot how to write anything interesting. As you can see (and read) currently. I made a lot of drafts. One of them ironically about how to do stuff when you aren’t motivated to do stuff that never got finished. So there’s a great representation I guess of what reading this blog in 2019 will be like.

I’d like to go back to doing long winded articles about the games I end up playing this year, but I also did this thing that adults do–usually a lot sooner in their adult life than 40–and got a part time retail job. Which has been sucking my will to write like any good will sucking vampire would do. So I’m not sure where I will go with 2phatgeeks in 2019. Should I stick to what kinda worked? Which was just showcasing how much of a hyper active 3 year old trapped in a middle aged woman’s body I am? As well as my husband’s responses in dealing with this? Should I write about more truthful things? I don’t know.

Maybe that’s the secret with good blogs that no one is sharing too. Protip kid: nobody fucking knows what they’re doing either so they either wing it or hire someone to wing it for them, I imagine someone saying in a cheesey 1920’s info reel voice.

Either way. Hello there, it’s me again. What are we supposed adults going to be hoping for in 2019? And how have all of you been?